I’m not sure this is a bug, but something’s changed. As a part of a much larger build script, I have a Team Foundation version history action.

I’m getting an error from tf.exe that it’s unable to determine the workspace.

In testing with tf.exe in a command prompt, I can repro this behavior by running the tool from a current directory that’s not mapped to a source control folder. The error occurs even through the command line doesn’t reference any local path. It’s of the form:

I suspect this is a tfs behavior change between tfs 2013 and tfs 2018, but I know I’m not going to get msft to make a change to help me

One thought: an option on the tf history command to set the current directory in which the command is run would probably do the trick. Is there a way to do this from the before script maybe?

I was able to proceed by putting T" "/collection:%Teamserver% into the Version box on the action options. Cheesy, but it got the job done. 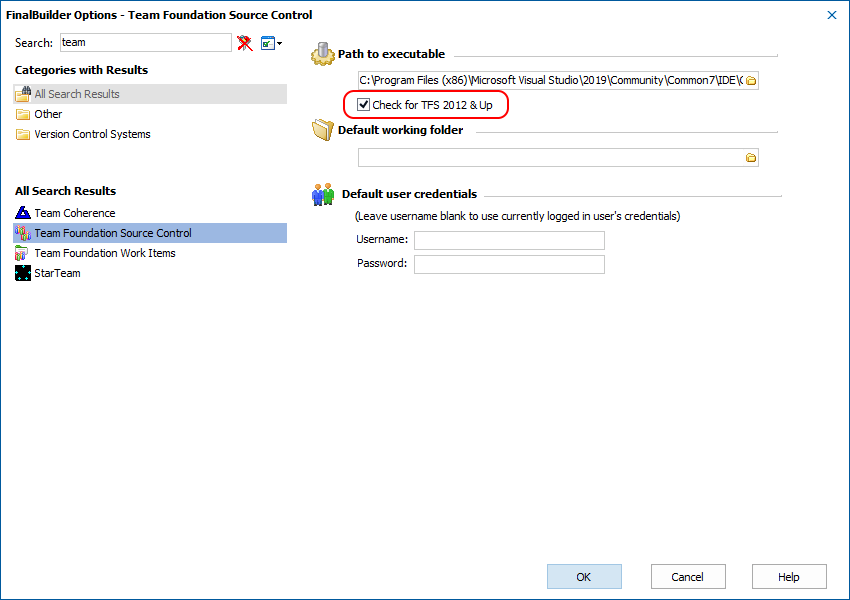 Checking the checkbox didn’t make any difference, but filling in the default working folder did. I’m on TFS 2018 now, moving from TFS 2013, but it looks like I had FB6 running tf.exe from VS 2010.

Anyway, it’s all sorted now - thanks for the pointer. I looked at that dialog many times and didn’t see what was right in front of my eyes…

Looking at the code I can see this is an oversight on our part, the History action should (like most of the other TF actions) allow you to specify the workspace folder.

I have added this option and will upload a build with that change shortly (building now).

This build has the change to the history action

Thanks, Vincent! You guys rock. Seriously - I’ve been using FinalBuilder for years and years (since FB3?) and I couldn’t ask for a better vendor relationship - not to mention a great product.