On one server I have the Error “RPC failed; furl 18 transfer closed with outstanding read data remaining”

Iknow the issue isn’t related directly to continua as I can reprocude it in a simple console.
But all solutions i found was that I need to first clone the repo with a depth of 1 like describe here.

This file has been truncated. show original

How can I adopt this to continua? is the folder inthe continuashare fix? could I just delete it and then clone it the way describeD? 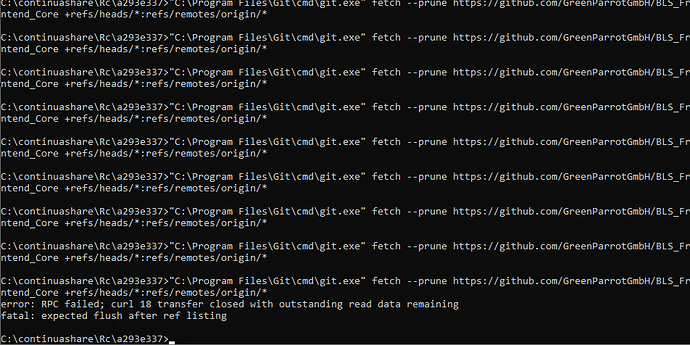 As long as the Continua CI Server service is shutdown, then you can delete the contents of the repository cache folder and then run a manual git clone. When the service is restarted it will continue to fetch changes.

However, from your command prompt output, the error appears to be happening during a fetch rather than a clone, so it’s quite possible that it will appear again.

Often, network timeout errors such as this are dealt with by increasing the http.postBuffer setting for git. e.g.

See The remote end hung up unexpectedly while git cloning (StackOverflow) for more details on using this setting.

Of course, you should also ensure that you are running the latest version of Git For Windows.

If this doesn’t work, then it is recommended to switch your repository URL from HTTP to SSH. See Git over SSH for instructions on setting up SSH keys.