When building a Delphi project which uses a custom version information key, the resulting executable no longer contains this key/value. Generate resource has been checked on the project tab.
We experience this problem after updating FinalBuilder from version 8.0.0.2338. 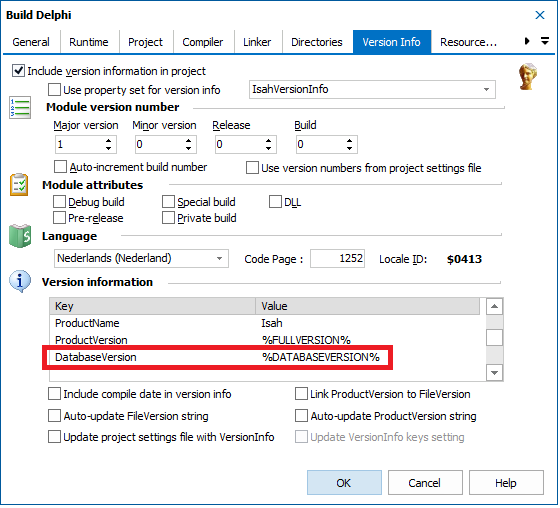 The info is probably there if you inspect the resource (using something like reshacker), however windows doesn’t show it.

The string-name parameter specifies one of the following predefined names

However developers have been bending the rules on this for years to put custom name/value pairs in there, and up to Windows XP the file properties dialog would show that info, but later versions of windows only show the predefined names.

The application is reading it’s own version information, so the first thing we did was to check for it using Resource Hacker. The Key/Value pair for DatabaseVersion was no longer there. It appeared again when we placed the previously used version (8.0.0.2338) of FinalBuilder back on the build server.

Is the value there in the generated .rc file? I’m not able to reproduce this here, so I would really need to see your FB project file - either send to support @ finalbuilder.com or send to me as private message (click on my username and then Message).

Ok, this turned out to be nothing to do with the Delphi action but a bug in the Set Variable action when using a property set expression in the new value.

This build has the fix

Thank you for the impressively quick fix.